Burstow & Hewett are a family firm of qualified auctioneers and valuers established in 1790. The busy salerooms are based in two locations in Battle and handle a combined total of over 30,000 lots per year in 48 sales. Read more about our team

The Abbey Auction Gallery is located in Lower Lake, Battle in what was at one time the Senlac Cinema. The building is strikingly Art Deco in appearance and retains some of the original cinematic features including tiered seating and a stage. The cinema itself closed in 1968 and was converted in to an auction room by the present owners.

The saleroom is on the site of the battle of Hastings and part of the buildings were originally a debtors prison.

Monthly sales are held here for antiques and fine art - including silver, jewellery, watches, fine furniture and rugs. This is the only dedicated picture sales in the South East, outside London! 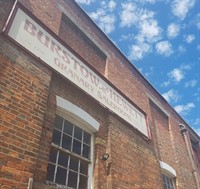 The Granary Salerooms in Station Road, Battle were bought in the 1950s by Charles Ellin, the first of three generations to run the firm, having previously used a tiny Victorian chapel in nearby Whatlington. His first task was to sell the grain which filled the building.

The collectable & furniture sales are held at the Granary on a monthly basis and usually contain close to 2000 lots across the 3 floors. Items offered in these sales include antique and modern furniture, household furnishings, ceramics, metalware, collectables, electrical appliances, rugs, pictures etc.

Live bidding is available via either the-saleroom.com or EasyLiveAuction.com.

5% surcharge plus VAT for this service.

Either 3% surcharge or £3, chosen by you at the point of registration.

Please use the link to register and refer to the 'Buying' section of our website for terms.